Testing (once and again) another new scenario that will be available as soon as I get my PC back (it's being repaired).

As always happens with Fear of the Dark scenarios, I'll try not to spoil the story, so, I'm going to make an AAR but skipping/changing some of the details of the scenario as I would like you to play and enjoy it...

This is a tense scenario that may seem quite easy but it may become a death trap easily in just a couple of turns.

Don't give anything for granted and enjoy...

Our group of characters face a hell of a problem when they find themselves in a small town where everything seems to be wrong.

Our warband is in that small town looking for a man that is trapped there, scary and dangerous monsters seem to be behind every corner and that man knows how to send those creatures back to hell, but he is unable to do it alone. 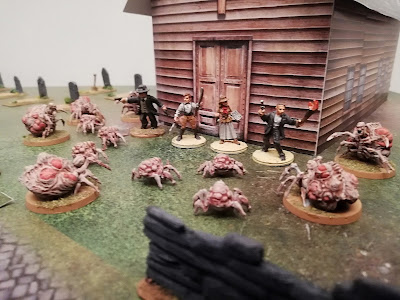 Our characters have to find that person and help him to cast a spell to make all those monsters disappear and send them back to the hell they came from.

Don't think this is going to be easy... 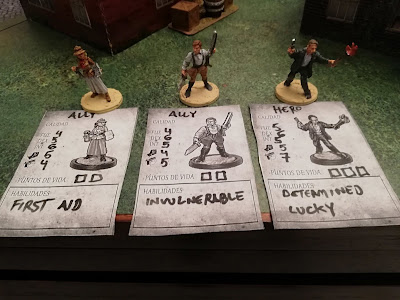 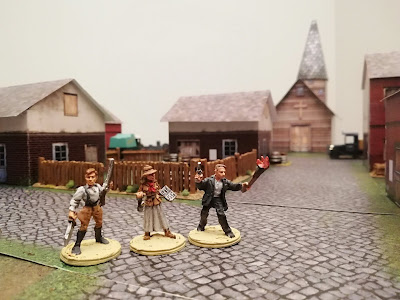 This is going to be the gaming table, in which we will place 4 Points of Interest and 1d5+1 monsters. We will place a "main" building (I placed a church) in one corner, and we will deploy our warband right in the opposite corner. 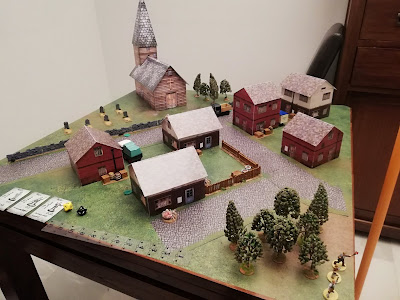 My hero and his two allies have to check the Points of Interest until they find the man they are looking for.

As they move towards the Points of Interest, some creatures appear suddenly and go straight to them. 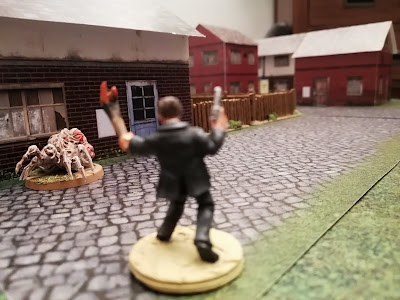 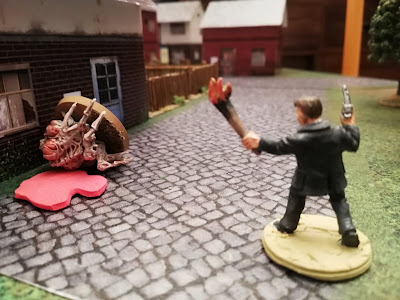 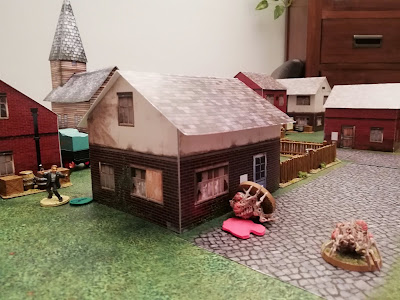 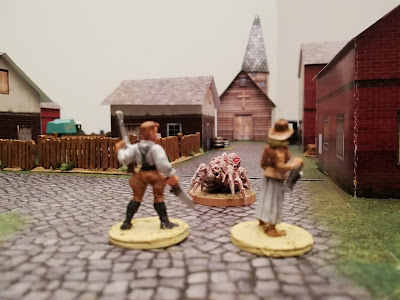 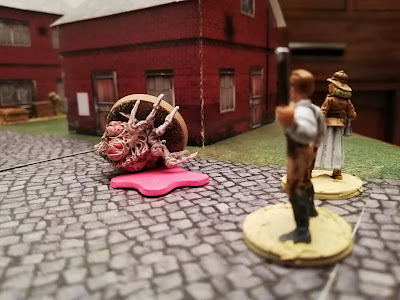 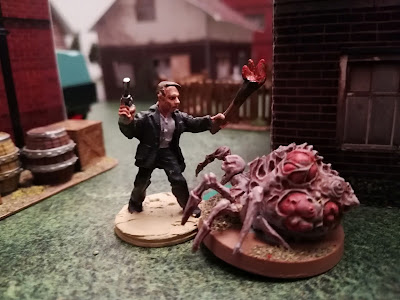 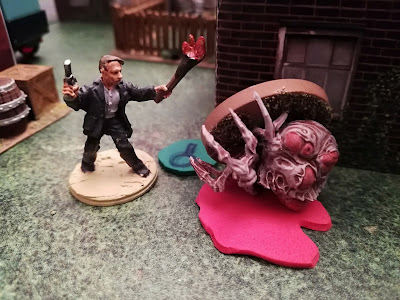 Our characters move forward killing some creatures, they think that this is going to be an easy adventure when everything goes wrong and more monsters keep appearing from some nearby streets. 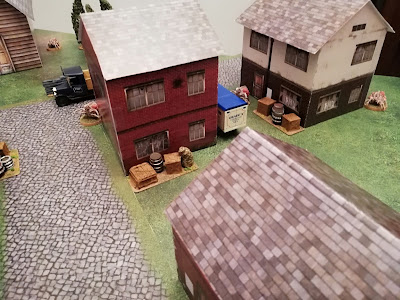 And when our warband was thinking that things were turning difficult, they hear some gunfire and they see the man they are looking for fighting a few monsters more. 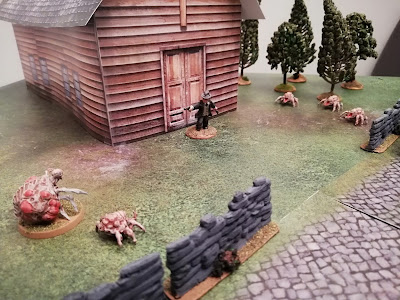 They fight the creatures that appear from everywhere, and one of the allies is wounded, but she heals herself as she has the First Aid skill. The rest is surrounded by those same monsters that try to kill them. 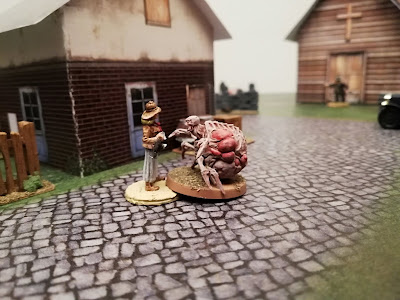 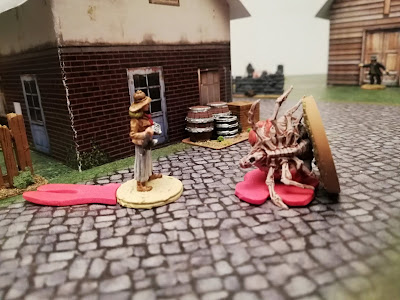 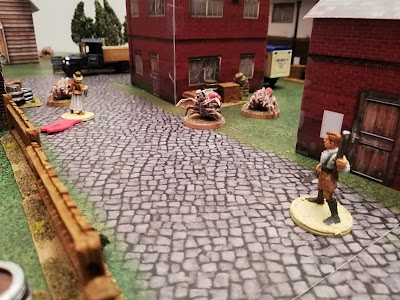 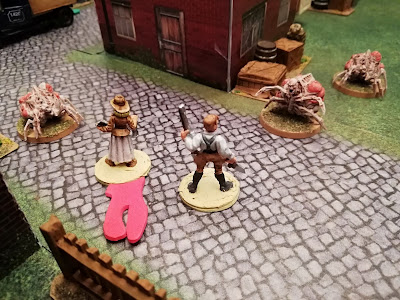 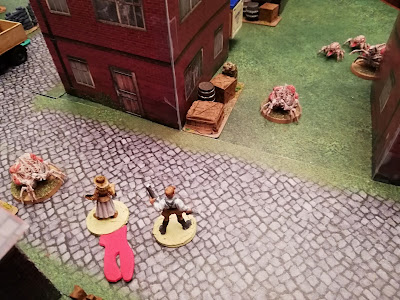 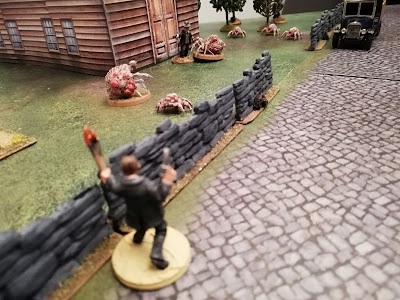 Fighting their way through the creatures, they finally get close to the man, leaving a trail of blood and dead monsters.

There was a moment that I had four characters (the three members of my warband and the man they had to find) fighting nine creatures... That was quite a big activation deck. 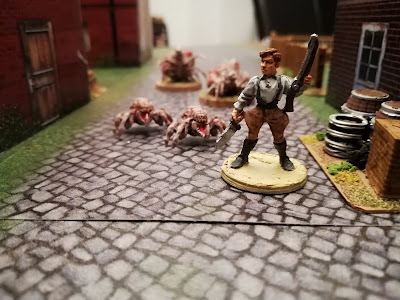 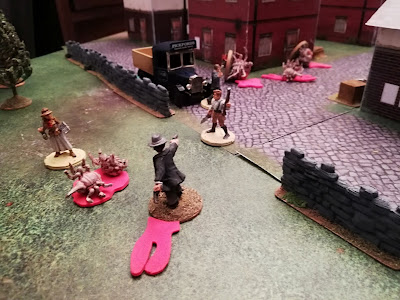 And once beside that man, they can help him to cast a spell to defeat the creatures, making it alive from the small town that almost becomes a death trap.

Wow, that was close... Playing the scenario several times gives me an idea on how to balance the enemy forces because although it is quite random, as an average I'm happy on how it finally works.

It will be available for free but I have to wait until my computer is repaired.

I hope you enjoy it.

You can buy this game in Wargamevault:
BUY FEAR OF THE DARK IN ENGLISH
COMPRAR FEAR OF THE DARK EN ESPAÑOL
For 10€ you will get a 130 pages PDF with the rules, 4 scenarios, cards, tokens and everything necessary to play.
Follow the game in FACEBOOK
FEAR OF THE DARK FACEBOOK GROUP