A new thrilling campaign is available for free for Fear of the Dark.

Jerry tugged several times on the axe handle unable to get it to release from where it was stuck, after trying in vain to pull the blade of the axe out he decided to rest his foot on the poor man´s back.

Pushing hard with his foot and pulling energetically on the axe handle, he managed to force the blade out of the back, exposing a large wound from which blood was flowing.

Looking down at the stranger's immobile body, he tilted his head to one side and crouched beside him.

Bringing his lips close to his victim's ear Jerry asked him in a low voice:

"Do you still hear the violins playing?" 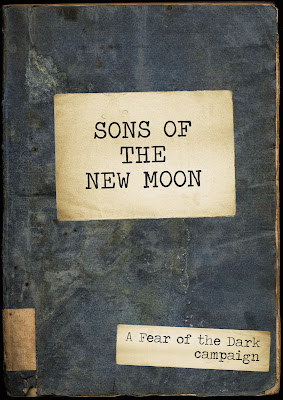 Sons of the New Moon is a campaign that will take your investigators to their limits: a writer is missing while he was making a research for a new book, a horror novel about a long time disappeared esoteric cult. everything seems like he has discovered something... something wicked.

Will they dicover the writer´s whereabout?

Will they make it alive?

Will they find what happened with the Sons of the New Moon?

This is the introduction for this campaign, to get it for free just log in your wargamevault profile and look in the Fear of the Dark folder, you may download and enjoy it.

Add comment
Load more...
Older Post Home
Subscribe to: Post Comments (Atom)
WHAT IS FEAR OF THE DARK SKIRMISH WARGAME?
You can buy this game in Wargamevault:
BUY FEAR OF THE DARK IN ENGLISH
For 10€ you will get a 130 pages PDF with the rules, 4 scenarios (and 1 campaign and 4 extra scenarios more...) more than 260 pages altogether, cards, tokens and everything necessary to play.
Follow the game in FACEBOOK
FEAR OF THE DARK FACEBOOK GROUP